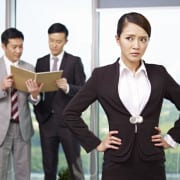 I’m a fan of Bruce MacEwan‘s Adam Smith, Esq. blog, which studies the economics of law firms.  Today, I’d like to call attention to a recent post that suggests a response to the issues of work/life balance.

It’s probably news to no one that although men and women graduate from law school in roughly equal numbers for over a decade, only 17% of the partners in large firms are women.  (If this is news, please see this post, which provides background information on the gender disparity.)   MacEwan reviews data that indicates that 90% of women who take “flex-time” positions do so to spend more time with their children and data that indicates that (unlike their female counterparts) male associates and non-equity partners with children work at least as many hours as men without children.  Only at the equity partner level do both men and women who are parents work less than their childless counterparts.  “The Women Partner Problem” then posits as follows:

What does all the foregoing demonstrate?  To me, one and only one thing. That one thing seems to have been lost in all the smoke and brimstone surrounding “gender equality,” “sexism,” and the endless, fought-to-an-exhausted-standstill debates between the societal and civic virtues of stay at home Mom’s vs. the battle cry of those calling the sisterhood to the professional office ramparts.

That one thing is:  Having children is different.  It’s different than taking a sabbatical or a detour into government or nonprofit service, and it’s vastly different for men than for women.

The unspoken assumption—on both the part of the firm and the part of the individual lawyer—is that father/lawyers are more committed to their careers and more determined to succeed, but mother/lawyers have heard the siren call of the newborn and will never report back to the office feeling the same uncompromised commitment they did before. Isn’t this what we all think but dare not say?

The post continues with a proposal to “purposely ‘park[]’ women out of the workforce for five to ten years—with no stigma—so that there need not be a stark, dichotomous choice between spending a critical decade or so of your life either launching a family orpursuing partnership. You could actually get to take your stab at both, seriatim not simultaneously.”  The suggested program is outlined in some detail, recommending a voluntary sabbatical for mothers only, with no provision for flex-time (or, as I read it, part-time) practice.

The full post is fascinating, and (as any Adam Smith, Esq. reader would expect) well-grounded in the data.  On a personal level, I admit to a visceral reaction to the seeming dismissal of reasons other than motherhood for dropping back from practice — quite probably because I am a childless woman who elected to work a part-time schedule during my mother’s terminal illness.  I’m also curious whether men with children work the hours they do because they want to, or because there’s less choice for men, though I certainly don’t have an answer.   However, there’s no question that MacEwan’s proposal is a step toward a more pointed conversation of work/life balance issues at least in the context of motherhood.  I’ll continue thinking it through, and I look forward to the conversation that will, no doubt, follow.

What restores your professional self?
Scroll to top