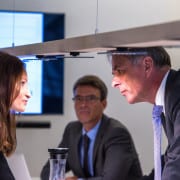 Lawyers rely on good communications skills.  Whether it’s in writing or in person, how well a lawyer communicates will have a significant impact on her career success.  We spend a lot of time learning how to make effective, persuasive oral presentations in the context of practice, but what about day-to-day communications?  These examples illustrate the problems that can occur.

**  Adam Associate has just started working with Paula Partner.  Adam is a good lawyer with strong skills, but things just aren’t gelling in his working relationship with Paula.  Last week, Adam put together a memo illustrating some strategic decisions to be made for a client.  The memo reviewed the possibilities and included lots of data and details on each option.  When he gave Paula the memo with its attachments, she looked at it and snapped, “Adam, I need a bottom line.  What’s the game plan here?”  Adam began to review the options so he could give Paula the background necessary to understand his final recommendation, but he could tell she was getting more and more impatient.  Finally he cut his comments short and told her what he thought the client should do.  Paula thanked him, and after Adam left she sat down to do her own quick review of the situation.  A few days later, Adam was surprised to find out that she’d made a recommendation to the client that was a good approach but didn’t make use of the hard work he’d done.  Both Adam and Paula are frustrated, and Adam is wondering whether he’s in line for a negative (and unfair?) review since Paula clearly doesn’t appreciate his precision and thoroughness.

**  Paula recently made a pitch to Clinton Client over lunch, to represent his company in a huge merger.  She delivered clear though somewhat abstract information about her experience and the firm’s capabilities, and she presented him with an action plan that showed how she’d hit the ground running.  She was puzzled that Clinton kept throwing in new ideas that were far outside what she had contemplated, and she was annoyed that Clinton interrupted their conversation several times to speak to friends and acquaintances in the restaurant.  Paula had the feeling that Clinton knew every person who walked through the door and that he was intent on speaking to all of them.  He asked whether Paula or her firm represented any of the movers and shakers in his industry, most of whom he identified as friends.  Although Paula was willing to make a personal connection with Clinton, she wanted to move on to business and was frustrated that Clinton seemed to be more interested in telling stories and drawing analogies rather than sticking to the facts.

**  Adam was having trouble with Sue Secretary.  Although she had terrific skills, Sue always wanted to know more about the work she was doing and seemed to approach Adam’s practice as if she and Adam were a team.  Although Adam appreciated her interest, he didn’t particularly enjoy the “bonding time” of talking about family and personal interests, and he sometimes felt that Sue’s favorite word was “why.”  Sue couldn’t stand the organizational systems that Adam demanded and wondered especially why he needed his files to be identical, with the labels printed in a certain font and arranged according to the system he’d been using since his first year in practice.

Do these situations sound at all familiar?  Have you ever found yourself wondering why someone behaves they way they do or wished you could predict how they might respond to a situation?  I’ve been using an assessment known as the DISC with clients for over a year now to help explain and eliminate these communications problems.  DISC measures the extent to which you exhibit behavior and communication styles known as Dominant, Influencing, Steady, or Compliant.  Once you know your own style, it becomes easy to recognize other people’s styles, and that allows you to adjust your own style for maximum effectiveness in communications.  You can learn more about the DISC here, here, and here.

Leaving the law: how to start the next chapter
Scroll to top