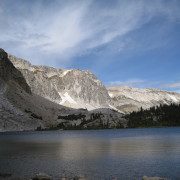 It’s been quiet here at the Life at the Bar blog recently.  I’ve been updating the blog platform, which pretty much brought the blogging itself to a standstill.  The new blog is up and running now (though it will be difficult to see any noticeable changes, I promise, they’re running in the background) and so it’s back to the regular schedule here.

I don’t imagine it’s news to anyone that our economy appears to be in financial crisis.  Despite a few rallies here and there, the trend goes in one direction: straight down.  I’ve noticed quite a bit of fear in the lawyers with whom I’ve been talking: fear of layoffs, fear of firm dissolutions, and the like.  There’s little doubt that we’re in uncertain, turbulent times, but I’d like to present the other side of the story.

While I was on my Wyoming retreat, I spent an afternoon by a remote lake.  (The photo to the left shows the view I got to enjoy.)  At one point, I looked across the lake to see a man fishing, with his dog at his side. The only sound I could hear was the peaceful lapping of water and the wild Wyoming wind.

And then, the dog’s bark broke the peace.  Just a double or triple “woof,” not a big deal.  Because of the mountains encircling the lake, though, the dog’s bark echoed.  And when the dog heard the echo, he barked again, clearly thinking that another dog had dared to trespass on “his” lake.  The barking escalated, as the barks and their echoes crossed, and the dog worked himself into quite a frenzy, despite his owner’s best efforts to quiet him.  The dog faced no threat, but he was ready to fend off an army of intruders.

The economic news over the past month in some ways reminds me of that afternoon by the lake.

There’s no question that today’s economy is difficult.  The U.S. (and much of the rest of the world) is experiencing a significant downturn.  People are losing jobs and homes and savings, and I would never suggest that anyone in that situation is imagining the trouble.  I suspect we’ve all held our breaths as news circulates about 400, 600, or 800-point drops in the Dow.  What’s happening is not an illusion.

At the same time, I’ve noticed some hints of the backing echo.  Those of us who haven’t been affected (or affected much) worry that it’s just around the corner.  We start talking about the fear, it gets echoed back to us (from worried others or from the media), and then the fear grows even bigger and stronger.  I have to wonder to what extent our fear is exacerbating the economic situation that’s caused the fear.

Leaders will be taking another view of the crisis.  By leaders, I don’t necessarily mean those at the helm of business or government, but those who possess strong leadership competencies and hold or assume a position to lead others.

The leaders’ view of the economy will be realistic – pain and fear exists, and so this isn’t the time for mindless acquisition – and it will also be realistically hopeful.  I’m not an economist (nor do I play one on TV) but I’m aware that when people and businesses quit spending money because of economic fears, the result is more lost jobs and more economic trouble, not less.  A meeting point must exist between the practices that led to this crisis and the practices that (in concert with many other factors) will help to pull the economy out of crisis.

Leaders know that opportunity arises even in chaos, and they’ll be watching for sensible ways to spend money.

If you’re going to spend money, ask what expenditures will make sense over the long run.  I’ve observed a lot of  “comfort spending”: dinners out, new electronic gadgets, and the like.  I have nothing against those consumer items, but unless they bring real pleasure or are used in some way to develop a relationship (for instance, taking a current or potential client to dinner), they’re of no ultimate, lasting value.

Notice your reaction when you have an opportunity to invest time or money into something that will strengthen you personally or professionally.  Is your immediate reaction that you don’t have the time, or you don’t have the money?  If so, the message you’re broadcasting is that your professional or personal life doesn’t merit the investment.  Without an investment of time and/or money, it’s tough to develop professionally, and the justification becomes a self-fulfilling prophecy.  Like the dog at the Wyoming lake, the echoes of the bark become the threat, and they appear to be absolutely real.  Remember the words that appears in the comic strip Pogo: “We have met the enemy and he is us.”  That isn’t the whole story, but it is a part of the story.

My top recommendations to weather this difficult time and position yourself to thrive when the economy picks up, as it surely will:

1.  Invest in your professional development.  Attend skills enhancement programs.  Read the books you’ve been meaning to read.  Find a mentor or a supportive peer group or a coach and lay a strategy for growing your practice and yourself.

2.  Strengthen your relationship with your best clients.  They’re worried, too.  Talk with them about their concerns, and explore how you might be able to help.  Ask what their plans are to move forward.  At a minimum, you’ll do service and develop a stronger bond by asking the questions and genuinely listening to the answers, and you may even pick up some legal work.

3.  Invest time and money in your business development activities.  This is not the time to pull back and wait for a restoration of balance.  The legal market is competitive.  Hiding from competition until it’s more convenient or affordable to participate is a mistake.

Follow the news, and look for the silver lining as well as the cloud.  What opportunities can you spot?

President Franklin D. Roosevelt expressed this far more eloquently than I could ever hope to do, so I’ll close with his words:

This is preeminently the time to speak the truth, the whole truth, frankly and boldly. Nor need we shrink from honestly facing conditions in our country today. This great Nation will endure as it has endured, will revive and will prosper. So, first of all, let me assert my firm belief that the only thing we have to fear is fear itself — nameless, unreasoning, unjustified terror which paralyzes needed efforts to convert retreat into advance. In every dark hour of our national life a leadership of frankness and vigor has met with that understanding and support of the people themselves which is essential to victory. I am convinced that you will again give that support to leadership in these critical days.