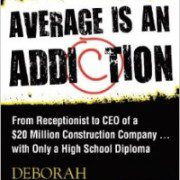 Average Is An Addiction by Deborah Dubree

Where are you average?  Make no mistake:  every area of life, even among top performers, separates into top, middle, and bottom tier.  Author Deborah Dubree notes that:

very few people have the guts, determination, discipline and commitment to break out of average and become the greatest at what they do.  Some people…have settle into being moderately satisfied with their current level of success.  Still others didn’t even realize they had options.

But those who are willing to be bold and push the limits of performance have the opportunity to bust through mediocrity and to move to the top in every area of their professional and personal lives.

Deborah Dubree started her career as a receptionist with a high school degree; she became owner and CEO of a $20 million commercial construction company.  Deborah is anything but average, and she now works with professional athletes (think NFL players from the Green Bay Packers, San Francisco 49ers, and more), college athletes, business professionals, and more to help them escape the trap of average.

Although this talk of getting out of mediocrity and reaching excellence might sound at first blush like motivational hoo-hah, it’s anything but.

“Average equals expendable.”  Large firm lawyers aw this principle in action at the height of the 2009 economic plunge, when those who had done all the right things and performed as expected (in other words, the average of that band of professionals) suffered layoffs.  Those who were above average either retained their jobs or had the opportunity to escape a firm’s failure by making a lateral move.

Dubree instructs top performers to “tame and train the B.E.A.S.T.”:

Through the 7 “C”s of Excellence, Dubree offers practical how-to steps on how to implement her anti-average action plan, by using choice, consciousness, change, courage, confidence, commitment, and consistency.

What’s the relevance for lawyers?

One of the key stumbling blocks for lawyers seeking to grow a book of business is contentment.  If you settle for “good enough,” it’s a safe bet that you’ll never push yourself, you’ll never go the extra mile, and you’ll never accomplish what you might otherwise have done.  You’ll be average.  (The same problem adheres for those who accept high competence in a professional skill and don’t pursue excellence.)

It’s easy to say you’re going to stop accepting average, but it’s tough to take the necessary actions and make the necessary changes without a roadmap.  Dubree’s experience in working with professional athletes should speak to lawyers:  operating in a highly competitive, lone-ranger culture in which admitting any weakness can be career suicide, it takes courage and dedication to reject the status quo and aim for higher performance.

Using the steps Dubree outlines, you’ll be able to identify the areas of your life in which you are an average performer, to decide whether that’s acceptable to you, and to step up your game if not.  This is the ideal time of year to take a retrospective look at 2013 to see whether you’re satisfied with the level of your performance or whether you’ve been merely content.  Average Is An Addiction is an entertaining and quick read, and if you apply its teachings, you can shift the trajectory of your career and your life from average to excellence.