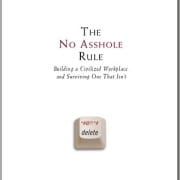 I’ve been intending to write this review for months.  What can I say about a book that so clearly describes the consequences of working with nasty people?  Or of being a nasty person?  It isn’t often that I feel gut-level resonance with a business book.  My best advice here: stop reading, now, and go order The No Asshole Rule.  Then, come back and keep reading.

Dr. Robert I. Sutton is a champion of the civilized workplace, created and maintained through careful enforcement of the “no asshole rule.”  Expanding and deepening his 2004 Harvard Business Review article entitled “More Trouble Than They’re Worth,” Sutton’s forthcoming book The No Asshole Rule (to be published on February 22, 2007, by Warner Business Books, but apparently shipping now through Amazon) offers valuable tips for eliminating or avoiding nasty people in business.  In less than 200 pages, Bob explains how to identify a workplace asshole (even how to tell if you’re the asshole) and describes the damage these assholes wreak on the organizations in which they work and the clients and colleagues with whom they come into contact.  He even addresses how to handle a workplace asshole, while warning of the dangers of “asshole poisoning.”  This is a must-read.  Seriously.

According to Bob, an asshole is one who oppresses, humiliates, de-energizes, or belittles his target (generally someone less powerful then himself), causing the target to feel worse about herself following an interaction with the asshole.  (And, as his examples prove, this behavior is not by any means limited to male perpetrators or female victims.)  These jerks use tactics such as personal insults, sarcasm and teasing as vehicles for insults, shaming, and treating people as if they’re invisible to demean others.  Sutton distinguishes temporary assholes (because, as he notes, we all have the potential to act like jerks at times, particularly when we’re stressed) from certified assholes, who routinely show themselves to be nasty people.  The latter, he argues, must go.

Having diagnosed the problem, he then recommends how to implement and enforce a “no asshole rule,” how an asshole may reform himself/herself, and how to survive working in nasty environments or with nasty people.  Finally, Bob discusses the dangerous topic of the benefits of assholes (such as motivating fear-driven performance and perfectionism), describing his trepidation in doing so as a concern that an asshole might seize on the benefits to justify her behavior.

Wondering whether you’re an asshole?  Take the self-test on Guy Kawasaki’s blog. Have a few co-workers (lawyers and staff) take the test for you.The American Lawyer has, according to Bob, published an article on The No Asshole Rule, but it isn’t available online.  Check your library.

It’s easy to identify the asshole partner in a law firm – the kind of lawyer who berates less senior lawyers and staff, the kind who’s prone to throwing things, the kind who goes red in the face, the kind who makes cutting comments thinly disguised as “humor.”  Those are the partners (or occasionally associates, but quite rarely so) who are labeled difficult, possibly aren’t permitted to interact with summer associates, and are tolerated only to the extent they bring in the business or the money.  Lest anyone think the choice is between being an overly polite wimp or a raving jerk, Bob specifically addresses the value of healthy, even noisy, conflict that is constructive for all involved.

Although the asshole partner is, unfortunately, almost an archetype in law firm life, it’s just as important to identify asshole clients – or better yet, asshole potential clients.  Those are the clients who will demand and demean, who will push good lawyers to make bad arguments, who will cause their lawyers untold stress.  Lawyers must know when to refuse a case, and evaluating the cost of representing an asshole is a critical underlying skill.

Escape the trap
Scroll to top