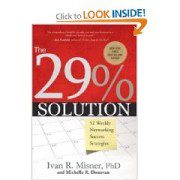 I heard a lot of response to last week’s suggestion that networking is the most important thing a lawyer can do to grow a practice.  A few disagreed with my assessment, but most responded by asking how to network well.  Some introverts mentioned their discomfort in walking into a room of strangers.  Others said that they’d tried networking but didn’t see good results, and wondered what went wrong.  And a few said they worried about being obnoxious or being cornered by pushy or mercenary people.

Although legal rainmaking is different in many respects from other kinds of sales, good networking encompasses a universally applicable system of skills and strategies.  This week’s book review, The 29% Solution, presents those must-take approaches and ideas in a simple, easy-to-apply yearlong program in which you take on one new skill each week through the year.  Do so successfully, and at the end of the year, you’ll join the estimated 29% of people who are separated from the rest of the world by just six degrees.

Section One sets out foundational steps such as setting goals for networking, blocking out time for networking, and creating a network relationship database to help you track the connections among your contacts.  By week seven, you begin to get into the meat of networking strategies with the “Top 10 Traits” of master networkers:

Section Two recommends ways to grow a network of contacts and points out in week 12 the danger that many lawyers face:  being a “cave dweller.”  Many reasons surely exist not to network:  discomfort, the press of business, desire to do other activities instead.  To succeed in networking, however, you will have to step out of your cave and into the wide world, where you can practice the steps presented in the previous subsequent chapters.

Section Three presents advanced strategies.  While not especially unusual, these tips are commonly practiced only by highly skilled networkers, and they tend to produce excellent results because most people don’t use them.  For instance, Week 19 recommends sending a handwritten thank-you card following a meeting, and Week 20 exhorts readers to follow up “TODAY.”

The “how to” tips of great networkers are the focus on Section Four.  Touching on topics such as event sponsorship and looking constantly for opportunities to develop relationships, these chapters reinforce helpful approaches that go above and beyond the typicaly networking tips.

Section Five focuses on how to communicate while networking and offers a golden tip:  ask others the questions you’d like to answer, because people will generally turn the question around to you after answering.  If you apply the chapters in Sections One through Five, you will become an effective networker.

If you want to become a masterful networker, continue on to Sections Six (which encourages you to become an expert, through writing and speaking), Seven (which offers some approaches for promoting yourself using client feedback and success stories), and Eight (which encourages the reader to do what others won’t do).

The 29% Solution offers the eminently practical (some might say obvious) reoommendation that you engage in smart networking, which is defined as focused, strategic, and delivering a high return on investment of time, money, and energy.  While this recommendation borders on being so obvious as to be a turn-off, it can be forgiven since it serves as a valid reminder not to strike out and flail about in a thoughtless flurry of networking activity.

If you’re uncomfortable in networking settings, pick up The 29% Solution and browse its ideas.  I would not recommend adhering to the weekly schedule, because you might delay or miss helpful ideas.  For instance, week 43 offers the helpful suggestion that you adopt the mindset of a host; this is one of the top tips I recommend to introverts, and I hate to think that someone might suffer through 42 weeks without finding the suggestion that, with a simple shift in attitude, can transform networking.

If you’re looking for information specific to networking in a legal setting, check out The Reluctant Rainmaker: A Guide for Lawyers Who Hate Selling.  You’ll find step-by-step recommendations on how to begin networking and how to become a master at growing connections with the right people to advance your law practice.  Visit TheReluctantRainmaker.com to learn more and to pick up your copy today.

What are your rainmaking priorities?
Scroll to top