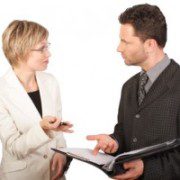 I recently spent nearly two hours sitting at an airport gate, sitting about 5 feet behind a stand with Delta American Express card representatives.  You’ve probably seen these stands:  a table to the side of a concourse, with various promotional freebies, application forms neatly stacked, and one or two hawkers, trying desperately to get people to pause and fill out an application.

Annoying, right?  I drowned out the hawker’s calls.  But as I sat reading, I noticed that more people than usual were coming up to this table, and they were staying longer than usual to talk with the card rep.  So I started listening.  And I re-learned something useful.

The average hawker bombards passersby with the “great offer” they simply “can’t pass up”.  But this rep focused on individuals and engaged them:  “You, miss, in the red shirt!  Where are you headed today?”

Some people ignored him, but over and over, people paused, walked to the stand, and talked with the rep.  Some told him about their travel delays.  Others told him about the jobs they were traveling for or the family they were leaving behind.  Several soldiers told him what it’s like to be on leave from duty in the Middle East.  And the marketer listened.  He asked questions and empathized.  He was genuinely present with the people who were talking with him.

After he’d heard some part of their travel story, he’d weave in his offer:  “Man, wouldn’t you like to get an extra 10,000 miles so you can get back to see her more often?”  Sure, the rep was trying to get people to apply for a credit card, but he was doing it by connecting with people, by building a relationship, albeit a brief one.  And almost without exception, the people who stopped in front of the display filled out something, whether a credit card application or a Delta mileage program application.

The contrast was clear when he went on break and another pusher took his place.  This hawker didn’t engage people,  He threw out half-hearted, “Sir, don’t you want some extra SkyMiles today?  It’s a great offer!  You can’t pass it up!  Sir, you flyin’ Delta today?  We’re giving away 10,000 SkyMiles free — for nuthin’!”  But the busy passengers did pass by the table over and over without stopping.  Those who did stop received only the sales pitch, and I’d guess this vendor’s application completion rate was much less than half of the other man’s.

Small sale or large, connection really does pay.  And it doesn’t require a tremendous amount of effort.  It simply requires genuine presence.  Not a bad reminder while waiting in an airport.

How can you apply this insight?  Write your website copy or the introduction to an article from your target read’s point of view.  When talking with a potential client or referral source, ask questions before you talk about your experience and qualifications.  Make it your practice to seek to understand before you seek to be understood.

The Powerful (Marketing) Message You Should Deliver Daily

Where Are You In Your Rainmaking Journey?
Scroll to top