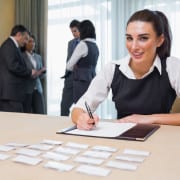 One of the things I most enjoy about the blogosphere is the free exchange of ideas and thoughts.  Recently, Stephanie West Allen and I have been discussing a trend reported by Canada’s leading newspaper The Globe and Mail in an article entitled “Office Stress Ruining Women Lawyers’ Lives.”  (With thanks to Gerry Riskin of Amazing Firms, Amazing Practices, who offers his commentary.)  From the article: “Women at modern-day law firms are so petrified of appearing unproductive that they sometimes conceal cancer or heart attacks to avoid being marginalized.”  Stephanie’s comment on this trend is, “I find the behavior of the women who would hide serious health problems to be extremely puzzling, almost bizarre. Think of the statement that makes about their values. Why would they make such a trade-off? What is so important? Are we seeing zombies at law?”

The law has long rewarded “macho” behavior: working punishing hours, dropping everything to serve a client, exhibiting a mental and emotional toughness that’s impenetrable on the job — all without complaint.  Although commentators often focus on the challenges that women face in confronting those expectations, I find that a number of men are equally displeased about the sacrifices demanded.  Indeed, Chief Justice Beverley McLachlin of the Surpeme Court of Canada made the observation that, “The strict, inflexible business model is increasingly questioned by men. . . [the question for the future is] How do we structure the way lawyers — women and men – work; the way they live, the way they serve the public?”

While women face a more challenging uphill climb in some ways, as marked by the often-repeated statistic that on 17% of partners in large law firms are women, I find myself wondering whether we’re in a phase similar to one that existed before women were permitted to vote, in which women struggle to achieve “equality” acting in the context of  an underlying social sense that women will bring “civility” to the system, only to find that women are indeed as tough as men, though perhaps that toughness is expressed differently.

At the end of the day, the questions we need to ask about the profession are gender neutral, though we must also recognize that women of childbearing age face an extra layer of complexity.

Readers, are you aware of lawyers (of either gender) concealing serious illness to “avoid being marginalized”?  I welcome your comments.

Top firms for women or leaving the law: it’s all about perceived satisfac...

Saying “NO.”
Scroll to top