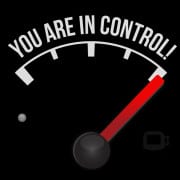 I was visiting DC earlier this week and flew out on a 7 AM flight.  Thanks to the early hour and my grogginess, I put my regular reading material to the side and spent some time reading Business Traveler magazine, dreaming about luxury travel.  And then I happened across an article titled Flight Fright, which included this paragraph:

Many of the people who are afraid to fly say their anxiety stems from the lack of control they feel onboard a plane . . . SOAR’s Tom Bunn agrees.”A lot of my clients are lawyers,” he says.”They’re used to being in control, and then they board a plane and suddenly they’re not.”

And suddenly, there I was, pondering the effect of control and being out of control on lawyers’ lives.  Are lawyers, as a group, a class of control freaks?  And if we are, what does that mean for practice and for “civilian life”?  I came up with three observations.

1.  Successful lawyers know that they’ll find themselves out of control at some point, and they know how to recover.  A client told me a story about a lawyer who was taking a case to trial.  He’d won partial summary judgment, so the trial was limited to a single issue of liability and damages… Or so he thought, until the court opened the trial by reversing the grant of summary judgment and announcing that trial would proceed immediately on all issues.  He had a good team of junior lawyers and a paralegal with him, and he revised his opening statement while the team revised their trial strategy.  Several steps allowed him to excel in an out-of-control situation.

2.  Successful lawyers know when and how to loosen the reins.  Lawyers who don’t delegate well tend to fall into one of two traps: either they fail to provide sufficient information to guide the performance of the work and get back imprecise results or a product that doesn’t meet their needs, or they over-describe, micromanage, and rework the finished product because they believe no one can do the work as well as they can.  Knowing when to accept work performed in a different, but equally effective style, is a key skill.

3. Successful lawyers understand that control is, in many ways, an illusion to be held lightly.  Whether in a professional or a personal setting, control is often illusory.  For instance, turning back to the fear of flying article, travelers may feel safer because they’re in control while driving, even though studies show that flying is safer — and even though we all know intuitively that controlling the wheel won’t always provide safety.  In the practice context, “control” over a book of business is important for professional advancement, but that control lasts only as long as the clients are satisfied.  Personally, we can control nothing except ourselves, and even that’s a dicey proposition at times.  Being in control, then, is actually a delicate balance that requires attention and adjustment.

Control is often a topic in coaching.  The questions I pose to clients and now offer for your consideration: Are you really in control of this situation?  In what ways are you not in control?  And what’s the impact?