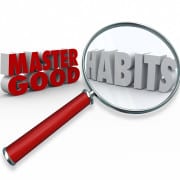 I’m not a physicist (I can barely spell the word) but as I remember it, the second law of thermodynamics is that entropy, which for purposes of this post only might be a synonym for chaos or disorder, tends to increase.  Another way of saying this is that systems tend to move from a state of higher organization to a state of lower organization.  I see that law play out, albeit in utterly non-scientific ways, in my life and in those of my clients.  A simple example is the level of order in my office.  At the beginning of the day, my desk is fairly tidy, and by the end of the day, it’s typically a mess; if I don’t neaten it at the end of the day, the cycle will just start again the next morning, with eventually disasterous results.  But when I do take the time to discard the things I no longer need, to stack papers, to return files and books to their proper spots, I have the pleasure of walking into a (relatively) orderly office.  And so, habit is the enemy of entropy.

Most of us have routines that allow our lives to function.  We typically brush our teeth in the same phase of getting ready for the day and for bed, we tend to drive to work or home in the same way, etc.  Professionally, the same kinds of activities keep our work lives on track: tidying the office, noting appointments on a calendar or PDA as soon as we make them, completing time sheets on a regular basis.  Although these tasks are in themselves rather small, they keep things running.  And that’s something to consider both in creating routines and in adhering to them.  Building a habit that supports you is a key skill for any lawyer.

Likewise, it’s worth noting that we all stray from our habits on occasion.  There’s nothing wrong with that, so long as we get back to the beneficial habit.  An example from my own life: last year, I joined a networking group and attended regularly.  If it was the third Thursday, I was at the meeting.  I enjoyed it, I made great contacts that produced business, and all was going well.  But then the group skipped a meeting.  And I was out of town for the next one.  Before I knew it, 8 months had passed, and I hadn’t been to the meetings.  Returning wasn’t hard, but it did take more effort than going as a part of my regular weekly habit.  I had to miss last month’s meeting, and I made sure that I’d made my appointment for the next meeting and that it was marked on my calendar in ink.  A part of suspending my regular practice is now planning to resume it — not because the habit itself is so important, but because it produces great results that I won’t get otherwise.

What habits or practices support you in being healthy, productive, happy, etc.?  Once you’ve identified them, pay attention when you stop following those routines.  There’s no harm in pausing; the key is to have a plan that will support you in resuming those patterns.  What’s yours?