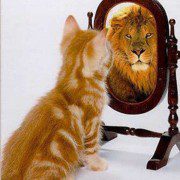 One aspect of coaching that oftens initially surprises my clients is that I offer feedback that shows them something they hadn’t previously appreciated, something that reveals another factor or aspect of a situation and perhaps changes my client’s view of things.

For instance, I was working with one client (let’s call her Barb) who was hoping to make partner and entered coaching to strengthen her performance so she’ll be a strong candidate.  She’d picked up on some comments that made her question whether she was viewed as partner material.  I found Barb to be intelligent, personable, and funny.  I also noticed that when I’d ask her a question about her work, she downplayed the role she played.  It puzzled me, because I could tell from the kind of work she was describing that she was a heavy lifter on the cases, but to hear her tell she was simply supporting work done by others.  One day, Barb said that a particular concern she held about making partner was that it didn’t seem like anyone regarded her work as being important or notable.  She explained the evidence for her feeling, and then I asked her permission to share an assessment.

I told her that when she described her own work, she minimized and understated her contribution.  To hear her tell the story, she contributed little more than hours — and certainly nothing critical in terms of strategy or deep analysis.  But when I asked specifically and pressed, she’d tell me about tasks she’d done and decisions she’d made that were quite high-level.  My assessment was that because she was so careful not to overstate her contribution — and perhaps so uncomfortable being in the spotlight — she didn’t give a fair opportunity for someone to understand the kind and level of work that she was doing.

We devised a plan for Barb to share more about her work, and she discovered that when she changed her style and became more open about what she was doing, people began to appreciate the scope of her work and to understand what she was capable of doing.  She got more and better work, and she felt that others’ perception of her was more accurate.

Feedback can be incredibly useful, whether it’s helping to illuminate a blind spot on communication style, professional skills, or strategy.  Corporations often use 360-degree profiles, in which subordinates, colleagues, and supervisors provide feedback to a third party about the person being reviewed, and the third party then conveys the anonymous and summarized feedback to the subject of the profile.  Such candid feedback can be helpful in highlighting strengths or in pointing out shortcomings in a clear and matter-of-fact manner, and both functions can help with development.  In fact, I’ve read several books on leadership over the past few weeks, and every one of them recommended undergoing a 360-degree profile process as a critical, foundational step for leadership development.

Law firms have historically declined to use these tools, though there’s some indication that the trend is changing.  Nevertheless, it’s worthwhile to get objective feedback where possible (if, for instance, you’re working with a coach or a mentor) and important to become skilled in learning to see oneself through the eyes of others.  Particularly when something seems to be askew, it’s a great exercise to step back and ask… How do others see you?

Law and the tightening economy
Scroll to top