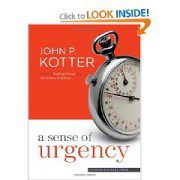 John Kotter, a noted expert on leadership and change management, fervently believes that attachment to the status quo is a silent but deadly killer. In A Sense of Urgency, Kotter demonstrates through numerous examples that organizations stall and atrophy as change fails.  Kotter’s bottom line?

If it ain’t broke, break it.

A Sense of Urgency draws on an earlier Kotter book titled Leading Change, in which he proposed instilling a sense of urgency as the first step of an eight-step process to implement successful transformation.  However, he found that increasing urgency is the most difficult and the least developed of the change process steps, thus prompting him to write A Sense of Urgency.

According to Kotter, change is continuous in nature. Rather than a single enormous change, such as an acquisition, continuous change exists in the form of (for example) new strategies and new projects.  Organizations must adopt a proactive approach to these continuous changes, which requires creation of an appropriate sense of real urgency.

Kotter maintains that carrying out proactive change requires organizations both to diagnose and overcome complacency (which he defines as “a feeling that a person has about his or her behavior, about what needs to be done or not done”) and to avoid false urgency, which creates a flurry of activity that distracts participants from legitimate activity that will produce meaningful change.  Kotter proposes several methods to do just that.

One of the most effective methods that Kotter recommends is to seek out opportunities and hazards coming from inside the organization, perhaps from clients, competitors, or the marketplace at large. This awareness encourages innovation and discourages complacency:  “When you don’t see opportunities or hazards, your sense of urgency drops.  With less urgency, you are even less inclined to look outside for the new possibilities and problems.  Complacency grows.”  Kotter offers a laundry list of approaches to develop this outside awareness, including listening to those who have the most interaction with the customer; using the power of video to bring important issues alive; sharing news — good and bad — with all members of the organization; sending people out as scouts to gather intelligence; and bringing key customers, prospects, new hires and information into the organization.

In addition, organizations should develop “urgent patience,” in which workers reject frenetic busywork in favor of working toward goals with purpose and intention, to avoid the danger of false urgency.  By remaining focused on key goals rather than merely generating activity, energy and attention are reserved for formulating actions that will produce desired movement.

One particularly interesting aspect of Kotter’s work is the marriage of logical, analytical, business-centered goals with an emotional connection to those goals. Bringing emotion to a solid business decision creates engagement, promotes workers to set and achieve higher goals, and prompts them to challenge the status quo and their ordinary comfort zones.  The result?  Meaningful change.

What’s in it for lawyers? There’s no question that the legal profession has undergone a complete sea change over the last several years.  The legal industry has been shaken up, and some lawyers are seizing the opportunities that are emerging.  Others, however, seem to be hunkered down, waiting for the storm to pass.  In my opinion, even when the storm itself has ended, we’re going to be left with a new world — there’s no going “home” anymore, Toto — which makes this a dangerous response.

Kotter’s theses speak to why those who are proactively seeking opportunities will be more successful than those who are just responding to crisis.  Effective change agents, he writes, “take carefully considered action to convert initial anxiety and anger into a determination to act now and win.”  Crises force re-evaluation and improvement, and in the absence of an externally-imposed crisis (a “burning platform”), Kotter urges organizations to torch their own platforms to stay abreast of change.

What has your (or your firm’s) response been to the downturn?  What has your own response been to your business development efforts?  If you or your organization tend to be reactive rather than proactive, I’d urge you to pick up A Sense of Urgency. For most lawyers, the platform has been in flames, and the resulting challenges bring both danger and opportunity. If you’re having trouble finding the opportunity, Kotter’s book provides substantial direction.  While complacency is unlikely to be the risk these days, false urgency (“We’ve got to reduce expenses!  Slash the business development budget, now!”) is running rampant in some circles.  Kotter can help.

Billable Time Or Biz Dev…Or Both?
Scroll to top