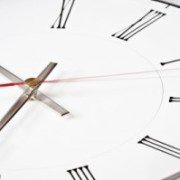 Time management has been on my mind this week, since I’m delivering a workshop tomorrow on that topic.  It often figures in coaching, sometimes as a key presenting issue and often as a secondary issue that comes to light in the course of the engagement.

Procrastination is always a big one.  It’s especially challenging for lawyers, I believe, because procrastination really can pay off.  There’s little point in preparing for a meeting too far in advance, since dates very often change.  Same goes for hearings, depositions, on and on.  I’ve identified tactics to deal with this kind of well-motivated procrastination, but that’s another post for another day.

To illustrate a different kind of procrastination, I’ll be sharing this YouTube video tomorrow.  (This was my first foray into the YouTube world.  I’m staggered at the number of videos there and the amount of time that people must spend making and watching videos.  But, this is from the woman who doesn’t own a TV, so perhaps I’m just out of step.)

Follow-up from the NALP conference

Ultimate guide to productivity: My tip
Scroll to top