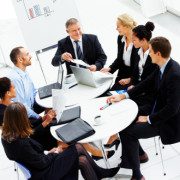 At last week’s ABA meeting, I attended an interesting business development program titled Making Rain in a Drought.  Although the presenter had generated a full presentation with PowerPoint slides, the audience began asking questions fairly quickly and their questions became the focus of the program.

One question struck me particularly.  A woman stood and asked why the focus of business development is so thoroughly on the individual lawyer, when firms are (she asserted) moving toward a team-based model in which a client “belongs” to the firm rather than to a single lawyer who created and nurtures the relationship.  Given the significant revolving door among law firms, the questioner posed, does it really make sense to encourage the “lone ranger” style of business development rather than a team-based effort that features cross-selling?

The speaker responded (and I completely agree) that although the cross-selling/team-based model described by the questioner is appealing and sensible, it isn’t the current model.  Many lawyers view cross-selling as a great idea in theory but not in practice.  As a result, the individual, not the team or the firm, tends to assume the central role in rainmaking.  (Cross-selling done well is actually a benefit for everyone — client, firm, and lawyers — but the barriers are significant for a variety of reasons.)

Unintended consequences of the layoffs and firms’ handling of the current economic challenges will surely abound.  What is the proper balance between individual and team/firm?  This question may become one of the key questions that large firms and lawyers working in them must face.

Want to know a secret?