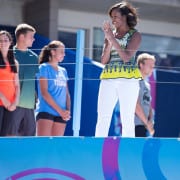 There’s an interesting story in yesterday’s Chicago Sun-Times, excerpting a new book that describes Michelle Obama’s dissatisfaction with the work she was doing as a second-year associate at Sidley Austin.  A sample:

Too monotonous for Michelle, who, White [the partner in charge of the firm’s advertising group, of which Obama was a member] says, complained that the work he gave her was unsatisfactory. He says he gave her the Coors beer ads, which he considered one of the more glamorous assignments they had. Even then, he says, “she at one point went over my head and complained [to human resources] that I wasn’t giving her enough interesting stuff, and the person came down to my office and said, ‘Basically she’s complaining that she’s being treated like she’s a second-year associate,’ and we agreed that she was a second-year associate. I had eight or nine other associates, and I couldn’t start treating one of them a lot better.”

White says he talked to Michelle about her expectations, but the problem could not be resolved because the work was what it was. He is not sure any work he had would have satisfied her. “I couldn’t give her something that would meet her sense of ambition to change the world.”

There’s no one-size-fits-all answer, I suspect.  If I were to coach someone feeling this level of dissatisfaction, I would ask questions like:

Many others, of course, but I’d likely start with those questions.  The goal would be to figure out the end-game first (because if the lawyer in question wanted to be a partner at a large law firm, the path to getting there would likely look quite different from the path she’d select if she wanted to teach law, just for example.)

The article, though, and my imaginary coaching session with Mrs. Obama highlights one comment that I often hear from ambitious large-firm lawyers: making it through the first few years can be difficult and frustrating, and those who stay the course may need a clear reason for doing so, to keep in mind that the boring work ultimately serves a purpose.