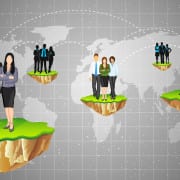 Today’s post is for those of you who are fairly new to the practice and those who hate the idea of networking and business development more than anything else you can imagine.

Is anybody still reading?

Second (perhaps) to legal competence, business development is king of practice.  And to bring in business, it’s important to have a network of contacts who have — or in the future likely will have — legal issues you or your firm can service.  This is not news.

I’ve been doing a lot of networking lately, the formal kind where you go to a meeting armed with business cards and a smile and you leave with a stack of other people’s business cards and a serious question about whether the smilefest was worthwhile.  My take on it is that no “networking” event is, in and of itself, worthwhile.  It’s what happens afterward that makes the difference.  Networking isn’t about getting business on the spot, it’s about developing relationships that will lead to business, directly or indirectly, down the road.  Networking almost always requires the long-term approach. (A foreshadowing: I’ve recently found and will be posting about an article that suggests the relationship view of networking is popular in discussion but almost universally disliked by lawyers in fact.  But that’s for another day.)

A few thoughts on how to network well:

To make the most of a networking event, it’s important to follow up with the key people with whom you speak.  Because I’m getting awfully tired of breakfasts, lunches, and coffee meetings, I’ve started thinking about other ways to cultivate business relationships (and the perhaps even more valuable social business relationship).  Golf is terrific — for golfers.  But for the rest of us…..

In defense of law firms