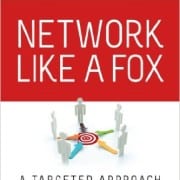 Networking has a negative reputation among so many lawyers.  It’s often time-intensive and, if not done well, can be a waste of time.  Lots of us (especially us introverts) dread the thought of walking into a crowd of strangers, so we spend time with people we already know, hang out on the fringes of the room and escape as soon as it seems feasible, or find great and completely reasonable excuses not to go in the first place.

Even if you get over those bars and meet new contacts, the challenges continue.  How often have you come back to your office with a stack of business cards and good intentions that get buried under a pile of work?  Even after the initial follow-up, continuing contact can be difficult to maintain, so relationships fizzle before they get off the ground.

And yet, we all know that networking is critical to rainmaking.  Although you’re most likely to get business from or through people who already know you, you need to be sure that you’re growing your network by adding new people on a regular basis.  After all, personal contacts are the foundation of every successful business development plan.

What’s a reluctant networker to do?  Read Network Like A Fox.  Here’s why:

Fox begins by offering an appealing and nonthreatening definition of networking:  “Networking is just an extension of your interest and curiosity about people, what they are up to in business, and how you can help each other.”  This definition explains why those who go for conversation on topics of mutual interest often do well with networking, while those who are simply on the prowl for business and seek to talk primarily about themselves tend to fall flat.

Fox urges networkers to eschew comfortable and easy networking in favor of building relationships with decision makers and influential business people.  This recommendation illustrates Fox’s absolute dedication to effective networking and underlines what I find so valuable about Network Like A Fox.  The book doesn’t spend time on the warm, fuzzy, “rah-rah” inspiration that’s so common in networking books, though it is full of encouragement.  Instead, it’s focused on how to make networking pay off, with case studies and advice on what it takes to make that happen.

One of Fox’s central organizing approaches is to break down the ideal network into four Connection Archetypes:

According to Fox, the “sweet spot” network (which she calls your “Grow Zone”) exists when all four of these ideal archetypes are present.

Understanding the archetypes will help you to create a productive networking strategy, how to reach the kinds of people you need in your network, and to determine which contacts merit more time and attention.

While Network Like A Fox is inarguably results-focused, it’s important to note that Fox doesn’t support or promote quid pro quo networking.  For instance, she recommends introducing the right people to one another as a way to enhance your value as a networker, but she cautions that expecting anything in return is a recipe for disappointment and frustration.  Instead, Fox writes:

[T]he solution to this is completely letting go of expectations.  It is the way to set yourself free.  If people don’t return the favors you provide, don’t get mad or disappointed.  Get moving, meet more good people, sow more seeds.  You will meet the right people who will definitely introduce you to good people.  Your stress and frustration level will plummet.

Why should you read Network Like A Fox?  Simple:  networking is one of the few non-optional business development tasks.  There’s no way around networking, whether you choose face-to-face or online, and you must have networking skills if you’re going to build a book of business.  Fox offers realistic, simple, insightful methods to become a valued networker with a valuable circle of connections.

Network Like A Fox is one of the best books I’ve ever read on networking, and I recommend it without reservation.  As I told Nancy when we last spoke, networking isn’t my favorite activity, but talking with her and reading her book always makes me eager to go out and build some new connections.  I hope you’ll feel the same.

Personal Contacts: The Foundation of Every Successful Legal Business Development...

Legal Business Development: Where do you stop yourself from getting result...
Scroll to top