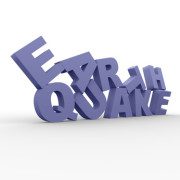 What a week we’ve had with weather on the East Coast:  if it isn’t an earthquake, it’s a hurricane. And for us east coasters, there’s nothing natural about that sentence.  Long-time readers know that I think Seth Godin is a brilliant thinker, and he hit it again with his insight into earthquakes and human nature:

Do you see how these observations apply to business development, both from the perspective of you who’s developing the business and also from your potential clients’ perspective?

What’s more, seeming everyone on the East Coast wanted to share where we were when the quake hit, did we feel it, did we know what it was. The coverage probably would have continued for an even longer period had it not been interrupted by Hurricane Irene.  Meanwhile West Coast dwellers were bemused at East Coast reaction to what would have been a non-event had it happened in California.

The earthquake was unexpected, uncommon, and thus worthy of discussion despite its lack of widespread impact. (The proof’s in the follow-up:  how much have you heard about the 16 aftershocks, four of which were over the “insignificant” 3.0 magnitude?)

Finally, did you see that the news spread via social media much faster than it did through traditional media? CNN.com had no reports ten minutes after the quake had hit, but Facebook and Twitter were ablaze with on-the-spot reports.

There’s a lot to learn from this “little” shake-up.  Don’t let it go unnoticed, and consider what it means for your business development efforts.

A Tale of Two Sales
Scroll to top