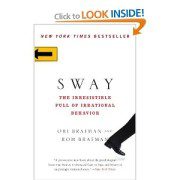 Sway:  The Irresistible Pull of Irrational Behavior
by Ori Brafman and Rom Brafman

Nobody likes to lose.  With our self-selection to be competitive and to be risk-averse, lawyers perhaps tolerate loss even less than others.  According to the Brafman brothers, authors of Sway:  The Irresistible Pull of Irrational Behavior, the more meaningful a potential loss is, the further we will go to avoid that loss, and the more likely it becomes that we’ll be swept into an irrational decision.

This irrational tendency is well illustrated by the story of a wealthy stockholder who held the great majority of his assets in a single stock.  His financial advisor recommended selling a set percentage of the stock every month “to take the emotion out of the decision” and to create increasing diversification, but the stockholder declined.  He did sell about 10% of the stock at $47, but he held as the stock dipped to $42, having decided that he would sell when it hit $47 again.  Of course, it slipped lower — to $38, and the stockholder decided he would sell when it hit $44.  Alas, the stock continued to drop until it ended at 12 cents per share, and the once-wealthy stockholder had lost nearly his entire investment.

The cause of the loss is no surprise:  loss aversion plus commitment.  The same cause is responsible for irrational bidding in an acution designed by Harvard Business School professor Max Bazerman.  He auctions a $20 bill in class with two rules:  the bids must be in $1 increments, and the runner up must pay his bid even though she receives nothing for it.

The bidding goes quickly to the $12-to-$16 range, at which point bidders realize that everyone is bidding for the same outcome and drops out, leaving only two bidders.  These two continue long past the point of reason, neither wanting to be the sucker who pays close to (or more than) $20 for nothing.  The record bid?  $204 for a $20 bill.  Each bidder’s commitment to the effort plus the desire to avoid loss brings on irrational behavior.

The authors identify irrational behavior at hand when we’re able to make a diagnosis, such as choosing the best job applicant or selecting high  potential leaders.  The Brafmans show that when we brand or label individuals, they tend to become “psychological chameleons” who take on the charateristics of the label.  For example, a study that followed Israeli soldiers through training arbitrarily assigned the soldiers as having high, regular, or unknown “command potential.”

The officers were required to learn each soldier’s “command potential” ranking, and in testing after the 15-week training course, the randomly assigned high “command potential” soldiers outperformed the others by 22.7%.  (We’ve all heard of similar examples of students underperforming when labeled as “slow learners” or “troublemakers” and excelling under the tutelage of a teacher who refuses to recognize those labels.)  The moral?  When we label others, they pick up on our subtle messages and cues and, as a result, they take on the characteristics of the label.

What’s in it for lawyers?  Sway illustrates that even when we fully believe we’re operating entirely from logic and reason, irrational psychological influences can undermine the logical perspective we believe we hold.  This recognition is critical for lawyers who may be swayed by these irrational influences in practice, whether while representing clients or while managing their own businesses.  Even more, lawyers must be aware of their clients’ illogical, irrational emotions and perceptions that can undermine rational decision making.