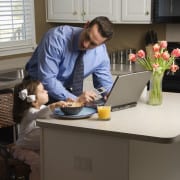 There was an interesting discussion on the Wall Street Journal blog The Juggle last week, inquiring, “When Dads Demand Flexibility Will the ‘Mommy Track’ Disappear?”  The post begins, “The idea of the Mommy Track is well worn. Perhaps too well worn. The term has always bothered me, in part, because it leaves out the many dads who actively participate in the juggle.”  And after recounting her husband’s experience in helping with their son’s care, author Jennifer Merritt muses, “I know of at least two other fathers who’ve also asked for adjusted schedules — without the repercussions a lot of moms seem to face. I’ve long wondered if the Mommy Track will go away, in theory, if more dads start asking for flexibility.”

A few of the comments address the question specifically for lawyers:

In my experience at a large law firm, I always tried to push the idea that “work-life balance” was not just a women’s issue – it had to be an issue for everyone if it was really going to work. It hasn’t fully caught on, although we did have one male associate who worked part-time (which was a big change from a few years earlier when a male associate was denied the p/t option). That said, I doubt he would have ever made partner and I think there’s still a long way to go. If I have any choice at all, I would only work for a company that has flexible schedule available to everyone. It’s just so much easier to convince the men that flexibility/part-time works when they do it too.

It’s an interesting discussion, especially in light of last month’s NALP press release entitled, Few Lawyers Work Part-Time, Most Who Do Are Women.  According to NALP:

In 2007, nearly all offices, 98%, allowed part-time schedules, either as an affirmative policy or on a case-by-case basis, but as has been the case since NALP first compiled this information in 1994, very few lawyers are working on a part-time basis, just 5.4% overall. Associates are more likely to be working part-time (4.8%) than partners (3.0%), but other lawyers, such as of counsel and staff attorneys, show the highest rate of part-time work, over 19%. Nearly all associates working part-time (91.2%) are women; among part-time partners, 71.2% are women. (See Table 1.)

According to the survey, about 2% of male lawyers work part-time.

One commenter on The Juggle seems to have summarized a common view of the situation without referring to gender but also ignoring the potentially disparate views of men and women seeking to work part-time:

1) It is a “parent” track, not a “mommy” or “daddy” track.
–
2) Those who want/need flexibility are generally going to receive less demanding assignments, less recognition, and less compensation than those who do not. Hopefully this is in proportion to the results produced.
–
3) When jobs are tough to fill, due to a strong economy, a shortage of specialists in a given area, etc., flexibility will increase. The reverse is also true.
–
4) The higher the pay, the lower the flexibility. Deal with it.

Forgot something –
The lower the pay, the lower the flexibility, because you are easily replaced.

I’d be curious to hear readers’ thoughts on flexible and/or part-time schedules, and specifically whether there is some disparity in how men and women are viewed when working a reduced or flexible-hour schedule to help with child care.  Any thoughts?