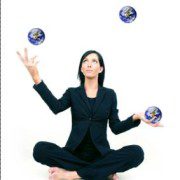 I’ve been intending to post about a New York Times article I read a few months ago, and today’s the day.  I have noticed recently that I’m receiving a lot of emails informing me that the sender is now limiting the number of times she checks email in the course of a day, and to contract her by phone for pressing matters.  (More on why that is on another day.)

And yesterday, I happened upon a provocative — if rather old — article on CNN.com reporting on a test run by a London psychiatrist.  The study tested three groups in completing an IQ test: the first group worked only on the test; the second group worked on the test while receiving emails, phone calls, and text messages; and the third group worked only on the test but had smoked marijuana.  The first group, of course, performed the best; the pot-smokers came in second (down 4 points); and the distracted test-takers came in last by 10 points.  According to the researcher, juggling incoming messages has an effect equal to missing an entire night of sleep.

The article Slow Down, Brave Multitasker, and Don’t Read This in Traffic reports consistent results.  Neurobiological evidence indicates that the human brain simply can’t do two tasks at once, if the tasks require any mental processing.  In other words, we can walk and talk at the same time (most of us, anyway) but, as reported in the article, when study participants were asked to see an image of a vowel and then say the vowel and to hear a sound and press the correct key on a keyboard, participants experienced up to a second’s delay.  As the researcher who performed that test notes, a second usually isn’t a big issue, unless it’s a second’s delay in hitting the brakes while driving at 60 mph.  The researcher doesn’t use his cell phone while driving.

Another Study I’d seen reported elsewhere that reveals surprising effects of interruptions.  Observing “information workers” in high-tech companies showed that interruptions occur about every 10-and-a-half minutes.  (I found another source that, regrettably, I’ve misplaced suggesting that interruptions occur every 3 minutes — and my experience indicates that to be a much more believable number.)  On average, workers take 23 minutes to get back to the interrupted task, including a tour through two other unrelated tasks; and about 20% of the time, workers never do get back to the original work.

Now, what does this all mean?

1.  We work better when we avoid interruptions.  If you’re trying to get something accomplished, close your door, put your phone on do-not-disturb, and don’t check email.

For those of you who are hyperventilating now, try it.  It’s a big change, but it’s effective.  You can always ask you assistant to watch your email (consider, of course, that you’re creating an inefficiency there…) while you get accustomed to this idea.

2.  Work in focused blasts and build in recovery time.

Studies indicate that the ideal “focus” period is 45 minutes, with 15 minutes left for recovery.  Even if you choose to check email repeatedly throughout the day, consider checking it instead during your 15-minute recovery time.

3.  Devise methods to keep your place during interruptions.

Sometimes interruptions are unavoidable, and that tends to be more true for those lower on the totem pole.  Keep a pad nearby and make a fast note when you’re interrupted to remind you of where you left off.  Perhaps you can’t choose not to be interrupted, but everyone can say, “Hang on, let me finish this note so I won’t lose it.”

Are you busy — Or productive?

Networking: the top activity for business success.
Scroll to top