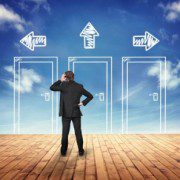 Just a few shorts today…  First, thanks to all who completed the 2007 Life at the Bar survey!  I appreciate the feedback and your suggestions, and I look forward to bringing you more of what you’d like to see.  Congratulations to the lawyer who won the drawing for an Amazon gift certificate; for privacy’s sake I won’t announce his name but will share that he’s counsel with a large firm.  Now, onto today’s shorts.

Law School Naysayer:  I hold that lawyers who chose to go to law school primarily because they didn’t know quite what else to do are much more likely to be dissatisfied with their careers than other lawyers.  And now, Kirsten Wolf is a BU Law grad who is campaigning to keep others from sliding into a career that won’t be a good fit:

I’m on a one-woman mission to talk people out of law school. Lots of people go to law school as a default. They don’t know what else to do, like I did. It seems like a good idea. People say a law degree will always be worth something even if you don’t practice. But they don’t consider what that debt is going to look like after law school. It affects my life in every way. And the jobs that you think are going to be there won’t necessarily be there at all. Most people I know that are practicing attorneys don’t make the kind of money they think lawyers make. They’re making $40,000 a year, not $160,000. Plus, you’re going to be struggling to do something you might not even enjoy. A few people have a calling to be a lawyer, but most don’t.

Or choose a non-practicing position: It probably isn’t news that not everyone who goes to law school ends up practicing law.  JD Bliss has profiled four lawyers who’ve chosen non-practicing roles:

Meet four law school graduates who are doing something different with their legal education.   They are in the minority, but these doctors of law are pursuing a diverse array of careers, including:

The reasons for these mavericks’ selections of nontraditional career paths are as varied as the positions they currently hold.

And a question for you to consider: When you think about your approach to your career (or just about anything else), are you playing to win?  Or are you playing not to lose?  I’ll be writing more about this in the future, but the question itself — and what it says about your leadership, whether of yourself or of others, may be illuminating.

How do lawyers learn to become rainmakers?
Scroll to top