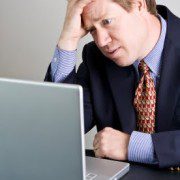 An excerpt from The Reluctant Rainmaker:  A Guide for Lawyers Who Hate Selling

Take note of the attitude you bring when you engage in client development activities. Do you dread them?  If so, identify specifically what you dislike and find a way around it or a way to make the prospect more palatable.

For example, John, a self-identified “nice but introverted guy,” detested the idea of business development because he felt like a fish out of water.  When we began to explore the reasons for those feelings, John recognized that he believed that the goal of business development activities is to target people and use connections to get business, and he was uncomfortable with that approach.

He wanted to be thoughtful to those with whom he came into contact and could not see a way to engage in rainmaking activity while meeting that objective.  When we discussed what he did for clients and the appreciation he sometimes received (as well as the satisfaction he felt in a job well done, even when it went unacknowledged by the client), John recognized that he was not using anyone and that providing legal services was in fact helping his clients. Moreover, he came to see that withholding his skill from someone who needed it would be destructive, not thoughtful.

Instead of viewing potential clients and referral sources as a “target” that, if “bagged,” would generate extra income and other benefits for him, John began to view them as individuals who have or know others who have legal needs that he could meet. This recognition, while it might appear elementary, was a significant shift for John.  It changed the attitude with which he approached client development activity from an uncomfortable “what can I get” to a thoughtful “what can I give” attitude.

John even altered the methods he used for business development to focus more on education and resource provision, in essence marketing his services by giving a taste for them. He felt aligned with this content-focused approach, which in turn made him feel more comfortable, which in turn made others feel more comfortable with him, and in the period of a few months John began to view rainmaking through an entirely different lens.

John continued to struggle with some activities, such as networking among strangers when he felt a pressure to uncover their needs, so he focused on activities that were a better fit for him. When I last spoke with John, he had developed a reputation as a client service provider par excellence and had brought in several new matters from and through existing clients.

What attitude are you bringing into your business development efforts? If it’s a positive one, terrific!  If not, take a few minutes to examine your attitude, see where it comes from, and how you might shift it.  While attitude alone won’t ensure success (or failure), it may well impact both what you do and how you do it, which will impact your success.  (For more on mindset and sales success, check this article from Inc. magazine.)

Consistency: The Hobgoblin of Mediocre Practices
Scroll to top