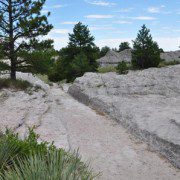 I took this photo of Oregon Trail ruts near Guernsey, Wyoming.  On this section of the trail, appropriately known as Deep Rut Hill, the route deviated away from the river and went over sandstone hills.  The wagons spread out to minimize dust across much of the trail, but thousands of wagons followed precisely the same path in this area.  The result?  Ruts that are up to five feet deep.

When I visited this spot, I imagined what the scene must have been:  mile after mile of emigrants traveling one after another.  And imagine the view — unless you were lucky enough to be in the lead, all you’d see for several miles would be the wagon in front of you.  Pretty dull, no?

As I imagined that scene, I started to think about “me too” marketing. It’s the safe route:  find the approach that’s worked for someone else and do it yourself.  If your mentor is a “never met a stranger, never ate a meal alone: kind of person, you might try to do the social butterfly act.  If your mentor touts the magic of public speaking as a mode to land new business, you might try that act even if you’d rather be stung by an entire swarm of South American killer bees.  (Remember, many polls show that the fear of public speaking outranks even the fear of death!)  If your mentor believes that a leadership role in an industry organization is the key to success… Well, you get the idea.

But notice the key word here:  ACT. If it isn’t you, if you’re just following someone else’s path, you’re just performing an act.  And let’s face it, most of us aren’t skilled actors.  Instead, we know that we’re playing a role, and others sense that something is off.  The end result is that we’re uncomfortable and usually don’t get good results.  So what’s the answer?

Figure out your strengths and your interests, and adapt those for business development purposes. If you hate public speaking, don’t do it.  Find something else you do enjoy, figure out how to fit it into your strategic plan, and go to town.  When you innovate and build in activities that you truly enjoy and that build on your abilities, you get to be authentically yourself instead of pretending to be someone else, and you’ll find that potential clients respond much more favorably.

Your assignment:  List your current business development activities and note which match your unique abilities and which put you in the role of imitator. And then, find ways to innovate yet further so your marketing really reflects who you are.  Don’t get stuck staring at the wagon in front of you.

I Did The Work… Now What?