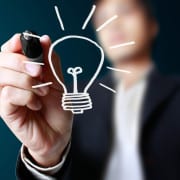 Have you ever had the experience of sitting down to write something important, having a rough idea of what you wanted to say, and yet finding yourself so tired or so distracted that you have significantly reduced ability to get the writing done?

I’m not talking about ordinary writer’s block or waiting for a muse to rest on your shoulder — that’s a luxury rarely available to lawyers.  What I’m describing is the temporary inability to draft something that’s reasonably straightforward in a way that accomplishes a workmanlike goal.  What can you do to jar the words loose?

1.  Take a break.  Get up from your desk, get the blood moving, get a change of scenery.  There is little more disheartening or un-motivating than staring at a blank screen (or pad) and searching for the words you need.  I strongly suggest not reading or trying to write, because that’s just more of what’s challenging you in the moment.  Get a cup of coffee, walk around the block (or at least around your floor), or close your eyes and listen to music that energizes you.

2.    Map your approach.  Sometimes the problem is having an idea that’s not yet sharp enough to reduce it to paper.  In that instance, try creating a map.  Write the core issue in the center of a blank piece of paper, then write related words or symbols around it and connect them to the main issue with a line.  Wikipedia has a good description of mind mapping, including a picture of a sample map.  Mind mapping encourages non-linear thought and easy organization, and it will create a path for you to follow as you begin writing.

3.  Begin in the middle.  Pick some part of your final product and start there.  Although a conclusion is a nice place to begin because it will define your approach and may thus make the rest of the writing easier, the important thing is to write some part of your draft.  Even if it’s a paragraph of illogical, emotional argument that you’ll cut from the second draft, just starting will move you forward.

4.  Just start writing.  Many lawyers have an internal critic who comes out to play at inopportune times.  You may start a sentence six times and scrap it each time because it just doesn’t sound right, and the result is verbal paralysis.  So give yourself permission to write something, anything, no matter how bad it may be.  Even if you end up with the legal equivalent of “it was a dark and stormy night,” at least you’ll have a start and something to edit.

5.  Try something unconventional.  When all else fails, turn what you’ve been doing inside out.  Try dictating instead.  Using a different mode of communication can be enough of a change to access the inchoate concept floating around in your mind.  If you don’t want to dictate, try talking out loud, whether to yourself or to a colleague.  Or write in another setting.  Though it may be heresy to some, there is actually no law that requires you to write in your office or even your home office.  Maybe writing at Starbucks or in a park would help.  Maybe you’d be more effective sitting cross-legged on your bed.  Give it a try.  Or write in longhand instead of typing, or vice versa.  Try writing like someone you admire (how would [insert an esteemed lawyer here] phrase this?) or writing like a pirate.  If you get to the point of trying something unconventional, make it as wacky as need be — laughter can also help to break the verbal jam — and then consider whether or how to bill your client for this “out of the box” experiment.

How can your practice become known?
Scroll to top