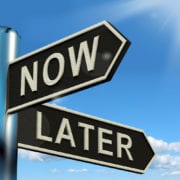 I strive to avoid procrastinating or, if resistance is futile, to procrastinate productively.  Even before temptations like Facebook and YouTube existed, I learned that wasting time would only leave me further behind and frustrated.  (One exception: when I was working in a large firm, I once spent a delightful afternoon with a partner who was recreating Dueling Banjos on two micro-cassette recorders.  Total waste of time, total blast.

But sometimes, even productive procrastination is a poor use of time.  It’s the Tipping Point phenomenon: up to a point, the productive activity undertaken in lieu of what I should be doing actually moves me forward in some way… But sooner or later, even the most dreaded activity has to be done.

And yet, I’ve noticed that, more often than not, when I just get started with the dreaded task, it isn’t as bad as I’d imagined.   The longer I wait to do something I don’t want to do, the bigger the task grows in my mind, until it’s become so massive that getting started is almost unfathomable.  Charlie Gilkey, founder of Productive Flourishing, explained this phenomenon in a blog post:

[T]he “dread”… increases substantially with time. The longer the tasks sits there, the more you think about it, and the amount of time you’ve invested in thinking about and putting off the task somehow gets added to the psychological “size” of the task….

At a certain point, the distinction between directly working on that task and indirectly working on it blurs to the point in which it doesn’t make sense to make the distinction. If you’ve spent all day (or week) avoiding and fretting about it, then you’ve spent time and energy on it that you could have spent on other things. To think about it in terms of the “soft costs” of inaction belies the point that it’s still costly, nonetheless.

What does this have to do with business development?  Reluctant rainmakers often dread business development activity.  There are plenty of ways to overcome that dread: get a mentor who can help, get educated on how to do the activity the “right” way, or work with someone to help you map out the process to follow, for example…

But the best way to overcome rainmaking dread is with action.

And the best way to get into action?  Just get started.  Whether the task is rainmaking-focused or otherwise, getting started counters inertia and will probably reveal that the task isn’t as bad as you’d imagined.

Stop right now and acknowledge the task you’ve been avoiding.  Take on that task right now.  Too big to finish at the moment?  Take five or ten minutes to get started, plan your next steps, and calendar a time for more action.  If necessary, set a timer for five minutes with the promise that you can then move on to something else.  You may find that it’s easier to finish it up (or make substantial headway) than to stop.

Taking a business development step consistently each day is one of the secrets to success.  Not only will you drop your dread level (and guilt as well), but if your steps are strategic, you’ll also start to see results.  Since success feeds on success, you may find yourself more willing to take on more and larger steps soon.

Need some accountability?  Comment on this post and let me know what you’re going to do and how it went.  I’ll be happy to cheer you on and perhaps even offer a tip if there’s some way I can help.

Procrastinating? What you don’t know can hurt your productivity.

Five Steps to a Profitable Practice
Scroll to top