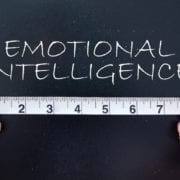 Emotional intelligence (EI) refers to the degree to which one is:

*  aware of one’s own feelings,
*  able to discriminate among those feelings and to manage them to faciliate appropriate responses,
*  able to motivate oneself despite feelings of self-doubt, inertia, etc.,
*  able to recognize others’ emotions based on various cues,
*  empathetic to others’ feelings, and
*  skilled in handling interpersonal relationships and conflicts.

Research by Daniel Goleman, who brought EI to public attention with his book Emotional Intelligence: Why It Can Matter More Than IQ, shows that 85-95% of the difference between a “good leader” and an “excellent leader” is due to emotional intelligence.  Goleman’s new book, Social Intelligence, examines neuroscience to further support the idea that humans have a biological tendency to be empathetic, cooperative, and altruistic.  It’s no secret that we’d all prefer to work with and for nice people rather than jerks, and EI is a measurable way to describe how a a “nice person” behaves and to help pinpoint the areas for individual improvement.

Googling on “emotional intelligence” will turn up over 3 million hits; Googling on “social intelligence” turns up about 38,500 (but Goleman new book was released only in late September, so that will surely change).  Stephen Seckler has provided a link to a very well-written Altman Weil article on EI for lawyers, complete with a quiz to reveal your EQ.  Check it out.