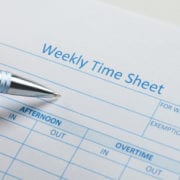 It’s probably no secret to those of you who read my blog on even a semi-regular basis that I enjoy the WSJ.com Law blog.  Interesting info, with generally good comments.  And that’s where I found the grist for today’s post.

You are taking a three-hour plane trip from Miami to New York to conduct a deposition in a matter involving client A. While on the plane, you spend the whole trip reviewing materials for a brief you will be filing for client B the following week. You normally bill clients for your time spent traveling on their behalf.

Can you bill each client for three hours?

Sixty-five comments later (which ranged from “Nope” to “We miss the days of the Concorde when you really could have a shot a billing more than 24 hours in a day”), the Law blog posted the answer, drawing on Formal Opinion 93-379 drafted by the ABA Standing Committee on Ethics and Professional Responsibility:

The answer: No, say rulings from national and local bar committees. Formal Opinion 93-379 from the ABA’s Standing Committee on Ethics and Professional Responsibility addresses the hypothetical:

. . . it is helpful to consider these questions, not from the perspective of what a client could be forced to pay, but rather from the perspective of what the lawyer actually earned. . . . A lawyer who flies for six hours for one client, while working for five hours on behalf of another, has not earned eleven billable hours. . . . Rather than looking to profit from . . . the desire to get work done rather than watch a movie . . . the lawyer who has agreed to bill solely on the basis of time spent is obliged to pass the benefits of these economies on to the client. The practice of billing several clients for the same time or work product, since it results in the earning of an unreasonable fee, therefore is contrary to the mandate of the Model Rules.

For example, a lawyer spends 3 hours traveling to attend a deposition in Seattle. If the lawyer decides to spend the time on the airplane drafting a motion for a different client, he or she may not charge both clients, each of whom agreed to hourly billing, for the time during which he was traveling on behalf of one client, but drafting a document on behalf of another. The lawyer has not earned 6 billable hours. . . . In summary, where the client has agreed to pay the lawyer on an hourly basis, the economies associated with a lawyer’s efficient use of time must benefit the client rather than giving the lawyer an opportunity to charge a client for phantom hours.

While the hypothetical is interesting (and a good example of the ethical issues that will confront lawyers almost as soon as they enter practice), what I find fascinating is the debate that the question raised.  Some of the comments are clearly tongue-in-cheek… And I’ll resist the strong temptation to remark on the wisdom of posting an intricate and, as far as I’m aware, utterly unfounded (though breathtaking) comment with one’s name, school, and class year attached.

Most firms do strive to acquaint both clients and lawyers with their policies about billing for travel.  That’s one of the fee provisions that clients frequently challenge, and this hypothethical illustrates the reason.  Clients would be horrified to learn that they paid for a lawyer’s time when the lawyer actually used that time to further another client’s business, just as I suspect most client would be horrified to pay in the hundreds of dollars an hour for a lawyer to sleep, watch a movie, or get drunk, even if those activities occur while the lawyer is on the way to the location for business on behalf of the client.  I suppose it’s possible to come up with a range of justifications for the hypothetical double billing — some of the comments attempted to do so — but looking from the perspective of the client, justification is not possible.  And I would be curious to see how a lawyer would explain to his or her two clients that the block of time billed to Client A was also billed to Client B.

Can associates engage in client development?

More on work/life balance… Is it just a fad?
Scroll to top