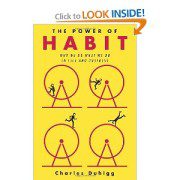 Every single one of my clients faces the need to build new habits at some point.  Whether it’s replacing an unhelpful old habit or building a new one from scratch, the process of illuminating automatic behavior and changing it can be quite difficult.  At the same time, building a habit that operates without conscious thought and that supports desired outcomes is a marker for success.

You have to have the right habits.

Especially when it comes to business development, I’m a proponent of building strong habits.  Why?  Because habits build a structure that takes over in the face of challenges.  Habits are behaviors that we perform without thought.  They just happen.  And when they don’t, we feel so uncomfortable that, for better or worse, we usually revert to the habit.  There’s a lot of power in a habit.

But it isn’t easy to establish a new habit, and it’s often even harder to break an old one.  We’ve all heard the “do it for 28 days and you’ll have a habit” advice.  That doesn’t match my experience, though, and too often it doesn’t match my clients’ experience.

Several recently published books explore habit, but Duhigg’s The Power of Habit captured my attention.  In an Amazon Q&A, Duhigg shares what sparked his interest in habit:

What sparked your interest in habits?

I first became interested in the science of habits eight years ago, as a newspaper reporter in Baghdad, when I heard about an army major conducting an experiment in a small town named Kufa.

The major had analyzed videotapes of riots and had found that violence was often preceded by a crowd of Iraqis gathering in a plaza and, over the course of hours, growing in size.  Food vendors would show up, as well as spectators.  Then, someone would throw a rock or a bottle.

When the major met with Kufa’s major, he made an odd request:  Could they keep food vendors out of the plazas?  Sure, the mayor said.  A few weeks later, a small crowd gathered near the Great Mosque of Kufa.  It grew in size.  Some people started chanting angry slogans.  At dusk, the crowd started getting restless and hungry.  People looked for the kebab sellers normally filling the plaza, but there were none to be found.  The spectators left.  The chanters became dispirited.  By 8 p.m., everyone was gone.

I asked the major how he had figured out that removing the food vendors would change peoples’ behavior.

The U.S. military, he told me, is one of the biggest habit-formation experiments in history.  “Understanding habits is the most important thing I’ve learned in the army,” he said.  By the time I got back to the U.S., I was hooked on the topic.

Duhigg’s book is divided into three parts:  The Habits of Individuals, which explores how habit works and how to create and change them, The Habit of Successful Organizations, which describes how various businesses use (and perhaps abuse) habit formation, and the Habit of Societies, which investigates societal habits and related ethical questions.  Filled with stories, anecdotes, and tweetable insights, the book is a quick read that seems to be well-grounded in research and experience.

I was surprised to learn that, according to cited Duke University research, more than 40% of actions are habits rather than action motivated by conscious decision.  Duhigg defines habits as “the choices that all of us deliberately make at some point, and then stop thinking about but continue doing, often every day.”  That’s when I began to pay close attention to the book.

Habits are based on a three-step process:  a cue that triggers the action, the action itself, and the reward.  Using examples such as the habit of checking email (routine) in response to a message waiting alert (cue) to relieve boredom (reward).  Duhigg explains why habits are so difficult to change.  When a cue triggers us, we crave a reward, and the habit occurs automatically.

To change a habit, Duhigg teaches, choose a cue and a reward, then focus on the reward until you crave it, and preferably join a group composed of others who believe that change is possible.  It sounds easy enough, and Duhigg offers plenty of examples, but he also acknowledges that habits become deeply and often unconsciously engrained, making change difficult.

I was particularly intrigued by Duhigg’s recitation of research that demonstrates the success of those who make specific plans for action well in advance and know how they’ll work around obstacles.  We’ve all watched carefully cultivated habits fall apart when work gets unusually busy or a child gets sick, and Duhigg’s recitation of finding after finding serves as a strong prompt to anticipate obstacles.

What’s in it for you?

The Power of Habit offers both conceptual and concrete tips on how to make habit-building more conscious and more successful.  As noted above, every single client I’ve worked with in the last six years has bumped into habits at some point.  Bad habits (such as returning to the office with intentions to follow up with a new prospect only to watch days slip by without any movement) have to go, and new ones take their place.  Implementing Duhigg’s suggestions will  help.

I wish The Power of Habit had offered more discussion around identifying harmful habits that are not obvious, such as the realization that Iraqi riots wouldn’t occur without food vendors’ presence.  It’s one thing to know what habits are getting in the way, and it’s another entirely to see a pattern of blockages without being able to identify the linchpin habit that’s creating problems.  (Very often, an outside observer is the best way to spot that habit.)  Once you’ve identified the deleterious habit, though, Duhigg can help you to change it.

I’m studying The Power of Habit to help my clients find more effective ways to build automatic behaviors.  If time is limited, I’d strongly recommend that you read at least the first four chapters.  You’ll get a good grounding in how to create and change habits, and you’ll likely find yourself at least skimming the rest of the book.

In the meantime, ask yourself:  what do I do with little or no thought that’s getting in my way?  What reward am I craving?  How can I get that reward without the harmful behavior?  What should I substitute?  Even if your study of habit remains on that relatively surface level, you and your business will benefit.

The Art of the Ask: How to Ask For Business (And When Not to Ask)

5 Ways to Generate Content that Get You Noticed, Connected and Hired
Scroll to top