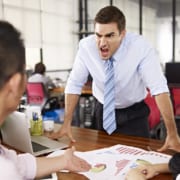 This is a true story.  Trial had finally started.  Richard listened patiently as Nathan gave his opening statement.  When he finished, Nathan sat down at his counsel table.  When Richard stood to offer his opening, Nathan crooked his finger to beckon Richard over.  Motioning Richard to lean down, Nathan turned his body so they were face-to-face just inches apart, but neither the judge nor the jury could see Nathan’s lips.  Grinning broadly, Nathan whispered “&%$@ you,” then leaned back in his chair – leaving the court and the jury with the impression that they’d just shared a friendly, collegial exchange.  Richard, seething throughout his opening, never quite found his rhythm.

Lawyers who are or aspire to be leaders must learn to self-manage.  The skill of self-management includes essentially anything that promotes the one’s best self: the habits that create sufficient energy, emotional resilience, and mental focus.  Especially when stressed or under pressure, it’s easy to let some aspects of self-management slide.  For example, some attorneys I know offer a blanket apology to staff and colleagues — something like, “I’m feeling stressed, so please excuse me if I blow up or yell at you or throw things, ok?”  I don’t recommend that approach; it’s better than nothing, I suppose, but it’s actually announcing that bad behavior is coming, apparently largely unchecked.

Lawyers are all too often faced with galling statements, actions, arguments, and behavior.  As the opening vignette shows, sometimes the irritation is extreme.  Some lawyers’ litigation tactics includes making an effort to find their opponents’ hot buttons: push the button and out pops an ugly, crazy person – not someone a jury would respect or believe. (Same goes for witnesses, too.)

So how can you handle it when faced with provocation that would make the Buddha quiver with rage?  I suggest six steps that can help you maintain your focus and avoid an unconscious reaction.  These steps are simple, but they may be difficult to apply in the heat of the moment.  The more you practice them, however, the closer they’ll come to habit.

And, despite our best efforts at these tactics, all of us lose our tempers sometimes. When that happens, don’t be afraid to apologize and admit to being human.

Leadership and Self-Management
Scroll to top