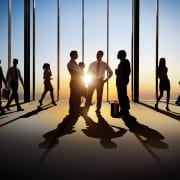 It’s come to my attention again that many, perhaps most, litigators step all over one of my pet peeves.  My pet peeves aren’t a big deal to anyone but me, but committing this particular error should be.

I hate, detest, despise hearing an attorney, especially a litigator in a jury trial, refer to his or her client as “my client.”  It’s nails on a blackboard.

Before you dismiss this as a bizarre quirk, let me explain why this is so.

Litigators spend a great deal of time thinking about how they come across to a jury or a judge, and they often coach a client on what to wear, how to sit, how to react to what unfolds in trial, and so on.  Although exceptions exist for every rule, generally the lawyer’s job is to stand with and for her client, and there’s a certain identification that occurs between client and attorney.  Counsel is sharp, intelligent, respectful, etc., so the client might be seen to be so as well.  There’s a game of sorts played out in this: the jury sees the lawyer and the client and their interaction, and to the naked eye it should appear that the lawyer is entirely convinced of the merit of the client’s case, that the lawyer stands with the client without hesitation.  (Indeed, that’s how it should be, not just appear, but that’s another post.)

But the moment a lawyer references “my client,” the game is over and the image is shattered.  The lawyer isn’t acting on his client’s behalf because the client is right; the lawyer is being paid.  There’s an immediate distancing that occurs as soon as “my client” is uttered, and the lawyer becomes less an advocate and more a paid mouthpiece.  I’ve heard some really marvelous arguments splintered by those two words.

Think about the final moments of a criminal trial, when the jury foreperson is about to announce the verdict.  The judge asks the defendant to rise.  And who stands?  The defendant and counsel.  That simple act defines representation to me.  No, counsel won’t serve time alongside a convicted defendant, but for that one critical moment of trial, counsel and defendant operate as one.   The same principle applies in a civil case.  Uttering “my client” is, to me, antithetical to that bond between lawyer and client.

It should be a privilege to represent someone.  Don’t stain that privilege by verbally breaking the wholehearted advocacy with  a reference to “my client”.

Consistency in rainmaking efforts; making the most of the next 2 months

Post # 100… Discussing my own work/life balance
Scroll to top