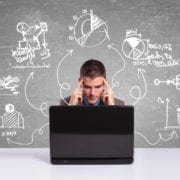 Have you ever had one of those nights, when you doze off only to be jolted awake with worry about something you need to do? Or caught yourself thinking “as soon as I get back to the office, I’ll send that email to the client,” only to realize hours later that you didn’t do it?

When you have a lot going on, things tend to get dropped or otherwise fouled up. Especially if you’re worried about something or you’re facing a difficult decision, your thoughts may be agitated by the “noise” of life. To-do items blend with ideas and interruptions into one big fog of mental chaos.

One recent example from: I was preparing for a major client meeting in between meeting with my mother’s doctors and hospice aides. On the way home, I stopped the grocery store.  By some miracle, I had a list of the items I needed to buy.  But I was so distracted that I returned to my car to find the keys in the ignition and the car engine running!  Just today, I passed by an empty car parked in a garage with the engine running, and I wondered what stress caused the driver to make that mistake.

Maybe you’ve never left a car running, but almost everyone has a story of errors, omissions, and just plain dumb moves that come from an overfull brain. An oldie-but-goodie post by Zen Habits titled 15 Can’t-Miss Ways to Declutter Your Mind can help you get clarity and focus so you can get things done.  The tactics (with clarification available in the Zen Habits post):

Does this seem soft? It’s just another step to reach the focused mind described in David Allen’s Getting Things Done. If what you’re doing isn’t working as well as you’d like, maybe it’s time to try another tactic.

Threat or opportunity? It’s all about perspective.

Track Your Results, Grow Your Practice
Scroll to top