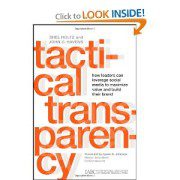 Tactical Transparency:  How Leaders Can Leverage Social Media To Maximize Value And Build Their Brand
By Shel Holtz and John C. Havens

In 2008, musician Dave Carroll was waiting to deplane from a United Airlines flight when he heard another passenger say, “They’re throwing guitars out there!” He looked out to see baggage handlers tossing expensive musical instruments, breaking his $3500 guitar. After getting runaround from United, he finally decided to put his story to music and release a video trilogy on YouTube and his website. After four days, over a million people had watched the video. United’s stock declined 10%, losing about $180 million in value, and the company finally paid Carroll’s claim for the damage. (For more on the story and its aftermath, see this article from Fast Company.)

We’ve probably all seen the emails, watched the videos, or heard the audios in which a clueless or uncaring company drives a customer to fury — fury that produces a social media backlash. In the old days, we’d have been limited to telling a few friends (studies show that on average we tell seven others about negative experiences and tell only three about positive ones), and they’d tell a few friends, and the word would get out…Slowly, and in limited distribution. Today, though, as Tactical Transparency describes, feedback can spread like wildfire, and corporations’ only choice is to how to handle that feedback.

Tactical Transparency opens with one story about Sony’s having launched a blog purportedly written by a boy named Charlie who wanted to help his friend Jeremy get a PSP for Christmas. Readers quickly discovered that the blog was the creation of a marketing agency and lambasted it as lame and offensive, though Sony denied the deception until it finally had to own up to it. A second story describes a blogger who wrote a series of posts describing his problems with Dell’s computer service and technical support. His odyssey was followed by hundreds and Dell’s reputation (and stock price) suffered, until Dell saw the light and launched its own blog, Direct2Dell, which talked openly about problems and worked to resolve them. Unlike Sony, Dell’s reputation improved as a result.

The message: people — your customers and clients and those considering doing business with you will talk, and you’d better listen and respond. Though the facts are considerably different, this message is illustrated in the legal community through the many blog sites and posts that tracked layoffs last year and accused firms of conducting “stealth layoffs”. It’s continuing now in discussions about which firms are cutting salaries and how much. There’s been much speculation that some firms will be impacted by reduced loyalty from lawyers who watched colleagues sent packing and from law students who take the lessons of the last two years as an indication that they’d better keep their options open and trust nothing. And it goes both ways, as witnessed by lawyers and summer associates who’ve left their own career-tanking tracks in unflattering emails that can be sent around the world with just a few clicks.

The authors of Tactical Transparency suggest that the new reality of transparency has arisen thanks to the twin trends of declining trust in “business as usual” and the rising public scrutiny of business due to social media. Tactical Transparency goes to the heart of the matter, examining the practical steps a business can take to be “sincerely but prudently” transparent with its stakeholders about its leaders; its employees; its values; its culture; the results of its business practices; and its business strategy. The authors identify four characteristics of transparency, which may be applied in varying degrees to meet varying needs: Objectivity, Purpose, Esteem (for your stakeholders and your customers) and Navigation, which neatly form the acronym OPEN.

Tactical Transparency discusses transparency in a variety of contexts, many of which are applicable to lawyers, but I’d highlight one as being particularly critical: relationship orientation. In other words, at least in part due to the rise of social media, business must look at the clients or customers in the context of relationships rather than one-off transactions. This is certainly a key concept for lawyers whose clients may have more than one legal need that they (or their firms) might meet. Tactical Transparency recommends eight steps to design relationship-focused marketing:

Although the key lesson I draw from Tactical Transparency has to do with business development, the book is wide-ranging in its discussion of social media and its applicability to business. If you participate in any kind of social media or if you’re considering stepping into the world of social media, this book will provide plenty of brain candy as you think about building your reputation with new social platforms.

How Thin Is YOUR Margin?
Scroll to top