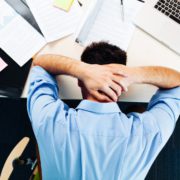 I don’t encourage failure… Mostly.  It’s helpful to assess and mitigate the risks of failure when you’re stepping out with a new activity.  There’s no glory in the “ready, fire, aim” approach when you have the time and the ability to do some (but not too much) preparatory work that increases the odds of success.

If you’re not failing despite doing some prep work, you’re probably not taking big enough steps.  Please, don’t fail because of laziness, intellectual or otherwise.  But recognize that if everything is going so swimmingly that you’re not failing at all, you’re leaving something on the table.

This video (which happens to be an advertisement for Nike) brings it all home.  Take 31 seconds to watch.  Yes, now.

By nature and by nurture, we’ve been trained to avoid taking risks.  Sure, it’s safer to do only what you know will work (even though sometimes you’ll be wrong about that, too, especially where people are concerned) but you’ll also miss a lot of opportunity.

An example for your consideration.  Referrals and introductions often come by email – “Bob, meet Susan, I think she may be able to help with your blah blah blah question.”  If you’re Susan, an email is the safe response to that introduction.  But a telephone call is often a more engaging and helpful response.  There’s risk involved: what if Bob doesn’t want the introduction or the help?  What if Bob is too busy and a call is an interruption?  That’s a risk I’d suggest you take almost every single time.  Sometimes you’ll fail, but (if you handle the calls well) the successes will outweigh the failures.

So, this week, ask yourself where you’re stopping yourself because you might fail even if you prepare as well as you can.  Specifically with business development and client service, what might you do differently if you were willing to fail?

Don’t aim to fail.  Do take some risks and accept that you may fail before you succeed.

How to Reach a Leadership Position… Quickly!

Listen up!
Scroll to top