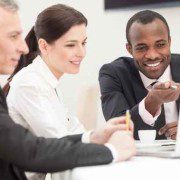 Since coaching is still a relatively new profession, having been around only since the 1990s, there isn’t much in the way of data to back up coaching’s claim to effectiveness.  As a lawyer myself, particularly as a lawyer with some scientific training, that’s been troubling to me.  I know coaching works because I’ve worked with a coach and I know that impact that experience had on my life, my practice, and my career path.  But that’s pretty soft data.

86% of leaders in the professional service firm rated leadership coaching as very effective; 95% are doing things differently as a result of coaching; and leaders noted significant impact in their leadership behavior, team-building, and staff development.  According to the study, the ROI from such coaching is 689%.

Among the executives coached, 60% noted a favorable impact on productivity and 53% cited increased employee satisfaction as a result of coaching.  The summary states that 60% of survey respondents identified specific financial benefits that resulted from their coaching, though details are not provided.  The study concludes that coaching provided a 529% ROI.

While these studies are open to question if only because the company that performed the studies also provides coaching services, the results strongly indicate that coaching is valuable in measurable and quantifiable ways.  That conclusion is backed up by a 2001 Fortune article that states, “Asked for a conservative estimate of the monetary payoff from the coaching they got, these managers described an average return of more than $100,000, or about six times what the coaching had cost their companies.” Executive Coaching — With Returns a CFO Could Love, Fortune, 2/19/01.

Because of my own experience, I’d believe in coaching even without data like this.  But it’s nice to see these reports that back up what I already know.

Lawyers and Divinity School — leaving the law to do good?
Scroll to top